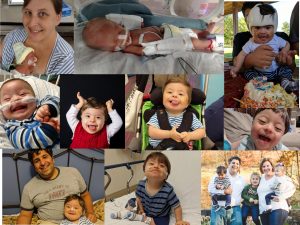 As I sit down to write this, I’m feeling very anxious. Brighton is 2-½ years old and we are currently trying to wean him off of a medication he takes for pulmonary hypertension. I am concerned he is having a negative reaction to the weaning – we’ve had to increase his oxygen requirements and he is noticeably more fatigued than normal and his cardiologist is out of town. Yes, his cardiologist, the cardiologist we have been seeing since before he was born.

So I’m anxious. And this is just one of many, many, MANY days of anxiety I’ve lived since May of 2016.

May 2016: This was my second pregnancy and I was 36 years old. A pregnant woman over the age of 35 is considered “high risk” or of “advanced maternal age.” I was also carrying twins, which upped my high risk factor. Accordingly my doctor recommended I have the Harmony test to check for chromosomal abnormalities. It’s a simple blood test and is non-invasive, unlike an amniocentesis.  “The test results will take about a week or two to come back; we’ll call you with any problems.” Pretty standard speak for doctors when you’re taking any kind of test, really. I thought nothing of it at all. I also thought nothing of it when the office called my cell phone while I was at work. Standing in the hallway of my office building I was told I they found the presence of Trisomy 21 – also known as Down syndrome – in the sample they took.  In that moment I felt confused and like something was very wrong. (I came to find out later how wrong I was and how right everything is.)

After a couple of weeks with specialists, more testing, and very difficult discussions with a genetic counselor and doctors, we confirmed – on the Friday before Mother’s Day, a day I’ll never forget – that our son had Trisomy 21, and our daughter did not. From this point on, my pregnancy became a series of appointments and ultrasounds. In my first pregnancy with our daughter Madeline, I had a few ultrasounds, but only the standard ones at the beginning, at about 20 weeks, and towards the end. With the twins, I had to switch to a high risk team of doctors who saw me every two weeks to do an ultrasound and measure the twins. I also started seeing a pediatric cardiologist because 50% of babies with Down syndrome have heart conditions, so he started tracking Brighton’s heart development in the womb.

At 22 weeks pregnant, we went in for another ultrasound. This is the day we found out that Brighton’s growth was not following the typical curve that Marigold, his twin sister, was following. He was noticeably smaller. I remember the doctor saying “there isn’t much we can do but wait at this point – at 22 weeks, it’s much too early to deliver the babies, so we have to take the chance and hope he keeps growing.”  Wait… What?!

“Our goal is to get them to 32 weeks because that will get the twins to an important milestone in their brain development.” Thankfully, it was at 32 weeks and 2 days that the twins were born. They were born on my husband’s birthday – October 1st – via emergency C-section. Brighton had Intrauterine Growth Restriction (IUGR), which is what caused his growth to evolve slower than Marigold’s. At 7:00 a.m. that morning the medical team determined Brighton’s placenta and umbilical cord were not functioning properly and the blood flow in his umbilical cord was in fact flowing AWAY from him. At 9:46 a.m. we met Marigold and at 9:47 a.m. we met Brighton.

With Maddy, I delivered her and had her placed immediately on my chest. With the twins I was lying on a table and got a quick picture with them each held next to my head before they were whisked away to the Neonatal Intensive Care Unit (NICU). I didn’t get to hold them until they were 3 days old. They lived under lights, with lots of wires and tubes all over the place.

Marigold spent one month in the NICU – she was born with proper physical development for a baby at 32 weeks. She just needed to gain some weight and learn to take nourishment from a bottle.

Brighton didn’t come home until he was 6 months and 6 days old. Because his lungs had not properly developed by the time he was born, he needed oxygen. On top of that, he aspirated fluids into his lungs. He needed to be intubated for a few days at one point just to give his lungs a break. He had surgery to receive both a G-tube feeding tube and a Nissen fundoplication, which is a procedure that tightens the point where the esophagus meets the stomach to reduce reflux. All this before he was 4 months old.

While all this was happening, we engaged a nursing service because Brighton was eligible to receive at-home nursing care once he was able to be discharged. At 4-½ months old he was transferred to rehab where he spent 6 weeks receiving inpatient physical, occupational and speech therapy. He still needed oxygen 24/7. He received feedings in his G-tube with a pump. Despite all of this, at 6 months and 6 days old we were able to bring him home.

We now live a life we never expected. It’s hard. We have a lot going on. We’re tired. We’re stretched thin. We’re scared at times. Brighton has been hospitalized several times in the past two years – all for respiratory viruses and issues like pneumonia and a scary one called human metapneumovirus (that was a 12 day PICU stay). I’ve had to call 911 several times. I had to leave my job in order to take him to all his weekly therapy appointments and various doctor appointments each month. I carry a document on my phone with the extensive list of medications he takes because every doctor needs that list every time we see them. We’ve had a nurse at our house almost every day for the past 2 years helping to take care of him.

He needs that level of attention because things can flip on a dime for him. We have a special stroller for him, a stander for him, approximately 12 oxygen tanks in our house at any given time, a monthly order of medical supplies, a Vitamix blender so I can blend his food to be given through his feeding tube, a nebulizer, a suction machine, and a pulse ox monitor that has woken me from my sleep so many times that I don’t really know what a full night’s sleep is anymore.

So…why Lucky 21? Sure, there’s a chance these things can happen to any child, any twin, any pregnancy. Ours happened because Brighton has a 3rd copy of the 21st chromosome. His placenta also had Trisomy 21, which is what complicated his growth. That extra piece, that 3rd 21, may not sound so lucky based on everything I mentioned above, right?

But, we are lucky.

We have a son, who, with his extra piece, brings an amazing amount of love and light to our lives. He is a lesson in strength, perseverance, and positivity. He has handled every single day of his life with a smile on his face and sheer, unconditional love in his heart. He has brought joy to EVERY SINGLE person he has met. He has brought smiles to my face in times of very hard tears. He is teaching his sisters lessons in love, compassion, understanding, and acceptance, even if they don’t realize it yet. He has given me strength I didn’t know I needed. We celebrate everything. We find happiness in the little things – he just learned to roll a ball back and forth between himself and another person. At 2 years and 2 months old, he finally learned to sit up on his own. Yes, that took a while, but he DID IT and he rocks it every day now. He CAN. He WILL. He DOES.

I was anxious when I sat down to write this. I’m still anxious. But we WILL get there. He WILL get there. I have to realize things like this every day, and it will be a lifetime of lessons taught by him. What an amazing teacher he is.

We are lucky. So very lucky.

*Note: A few hours after writing this, Brighton’s nurse and I were packing him up to go to the Emergency Room. After consulting with three doctors via phone, we decided it was best to get him checked out to rule out any respiratory illnesses. In the end, I was right. It was the medication. After receiving a full dose of his medication, the energetic, happy and silly Brighton emerged amidst the X-ray and tests we did in the ER. We were home six hours later and he’s doing well again. This is our norm. We know our son. We know the signs. We take it one day, one hour, one minute at a time.

To learn more about Brighton and Down syndrome facts, check out my blog  brightonhisday.com